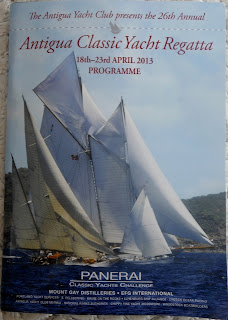 "To all cruisers, the 4th Annual Coconut Telegraph Meet and Greet will be held tonight at 4pm at the Mad Mongoose.  This is English Harbour Radio, signing off”.
And so it begins!  It’s like a gathering of the clans.  From Sinbad’s mooring in Falmouth Harbour, we can see the boats; classics, cruisers and mega-yachts; entering the harbor one by one in anticipation of the Antigua Classic Yacht Regatta.

Each year, classic yachts from Europe, North America and the Caribbean gather to show off their mirror-like varnish, gleaming brass, and their grace and speed under sail.  The docks are a hive of activity with crew members scurrying about their tasks, sailors aloft tweeking the rigging, and stores selling beverages and spirits by the case. 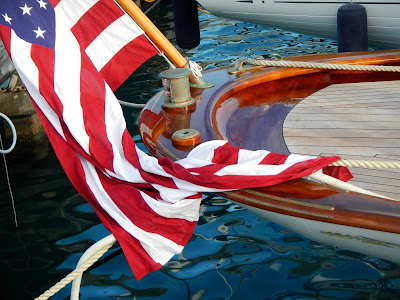 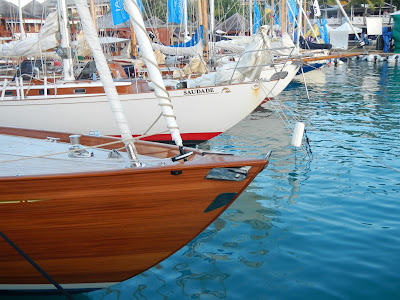 Every night of Race Week starts with a party, and the Coconut Telegraph is the first.  We met new friends and renewed old friendships from last year’s events.   It was nice to get to know fellow cruisers in advance of the arrival of hordes of visitors and race crews.  We talked about upcoming cruising plans, summer hurricane season arrangements, and swapped stories and insights on dockyards and anchorages around the world.

Randy volunteered last year to assist the Antigua Yacht Club, host sponsors of the event, and this year we wanted to do it again. They remembered Randy and his comprehensive skill set.  We were issued official volunteer t-shirts and assigned to set up the food tents and move picnic tables on Wednesday, in preparation for opening night. Come evening, we headed in to the Mongoose for the first Red Hat Party. For buying Mount Gay rum drinks, you can collect tickets to get Mount Gay Regatta shirts or the coveted Red Hats, worn as a status symbol by sailors everywhere.
The next day we went hiking. From Nelson’s Dockyard we took the water taxi to the Galley Bay hotel, and from there hiked out to Fort Charlotte. Unlike most ruins, this one has a big tree with picnic table under it, a breezy vantage point for watching the races in shaded comfort. 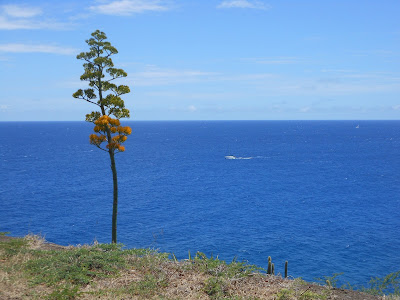 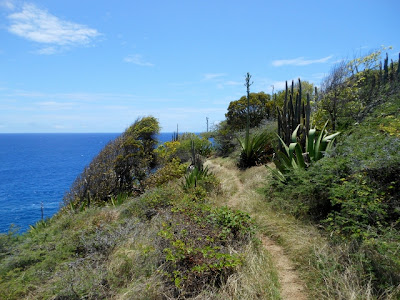 Along the trail eastward are the majestic sea cliffs of Cape Shirley.  Because this was a short hike, Randy agreed to go further, up Desmond’s Trail to the overlook at Shirley Heights.  It was a good scramble, with cool refreshments in the Georgian-era Inn at the top.

That evening at Happy Hour, Randy and Skipper Bruce talked Bruce’s young crewman Jeremiah into hiking up to the fort at Monk’s Hill with Di. That got Randy off the hook! The next morning Di picked up Jeremiah at the yacht club and headed for the Catamaran Hotel dinghy dock.  We walked toward Falmouth, and turning inland, climbing a steep road past some very nice homes and panoramas of Falmouth Harbour. 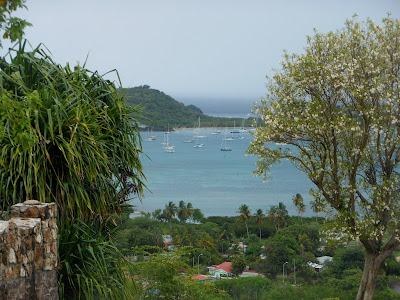 Up and up we went, from road to two-track to trail.  The path wound uphill through dense prickly acacia, along a steep escarpment. We took a wrong turn and ended up at a dead end in the thorny tangled bush.  We bushwacked on with the cutlass, following the ridge until a higher escarpment and at last the fort walls came into view.  Scrambling over a massive collapsed wall, we hacked on until we reached the road and the fort’s arched gate.
There’s not much left of the structures of the fort, other than the munitions storage building, always the last standing since the walls are at least three feet thick.
There were splendid views  in all directions. We had fun, since we are both history buffs. Jeremiah was great company. The scramble down is always faster, and as soon as Di got back to the boat, a drenching shower rained down, washing away the dust and sweat. Randy had been cooking all day, and made grilled pork loin and rice pilaf, with a crisp tossed salad to start. Yum.  We headed ashore for yet another Happy Hour, and met up with cruiser friends Morgan and Sherry, who invited us to join them aboard 64’ catamaran Nirvana for race watching. Cool!!! 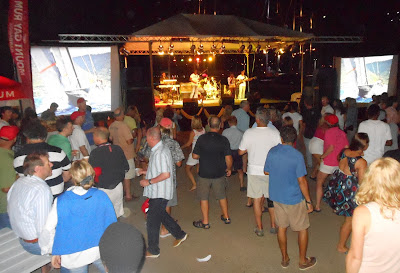 The next day at 0830 we tied up to Nirvana and joined our cruising friends for a race-viewing party.  Bob and Debbie from Chamoya, Janice and Steve from Sailacious, Anne and Jim the Brits from Impressionist , Darnelle aboard Island Dream (we met a year ago in Virgin Gorda), South African John from Out of Africa, Steve the Brit photographer, Jackie from Compass Rose, Mark and Winnie from Liahona. Lovely people. 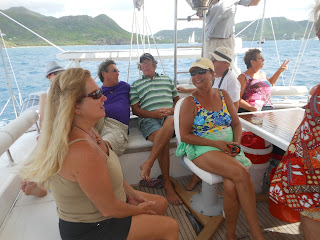 Morgan skippered us right into the race action. I’ve never experienced the excitement of yacht racing ‘til we were at the starting mark when the canon fired “start!”. It was thrilling. 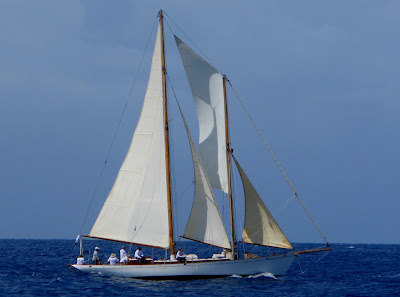 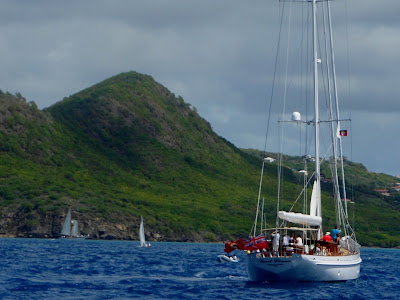 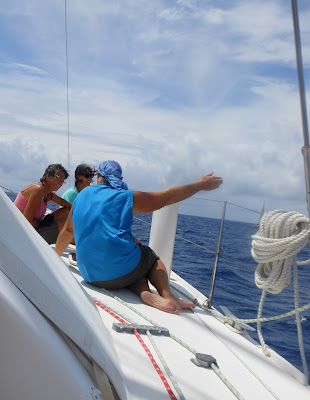 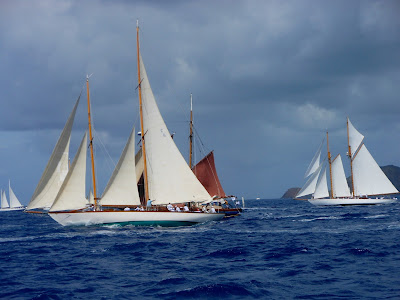 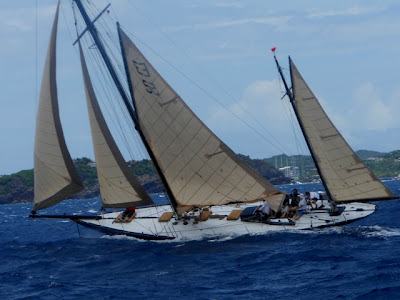 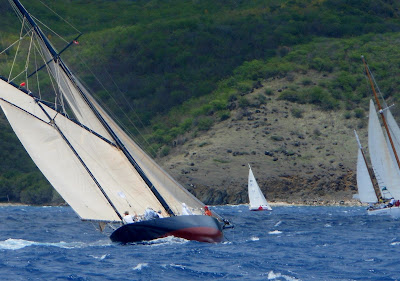 On the second day of racing, the wind was fierce; three boats were dismasted and several others sustained damages and had to retire from the racing.  Thankfully no one was hurt.  The carpenters were busy that night.

Race week continued like this, with hiking or resting by day, parties by night, and another trip out among the racers, thanks to Morgan.  We got some great photos (they might have been better but Di’s camera is dying).  We gathered with friends in the Dockyard to watch the Parade of Yachts through English Harbour on Sunday. 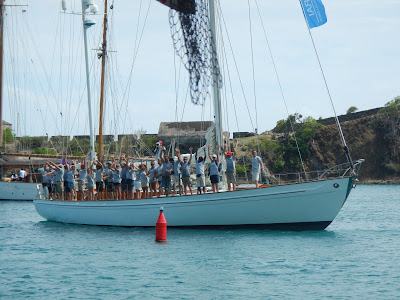 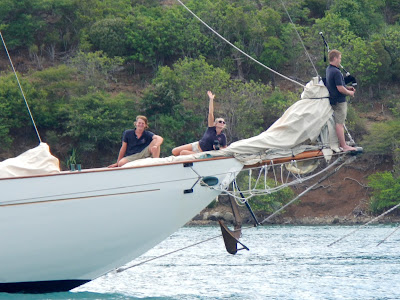 At last we had to say farewell, for it was time to move the boat to Jolly Harbour for water and fuel in preparation for moving south. The weather window is Open!
MORE PHOTOS FROM THE ANTIGUA CLASSIC REGATTA 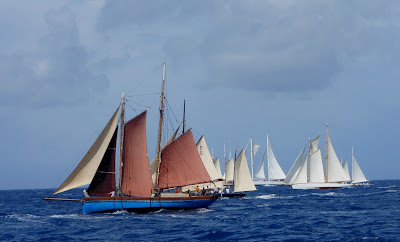 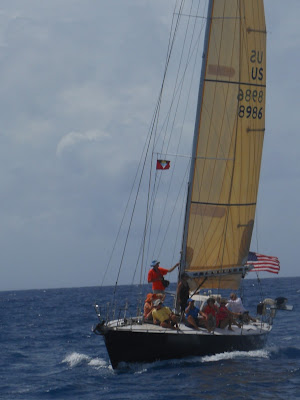 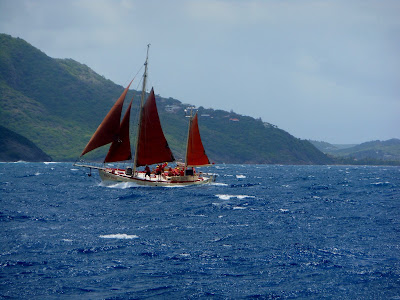 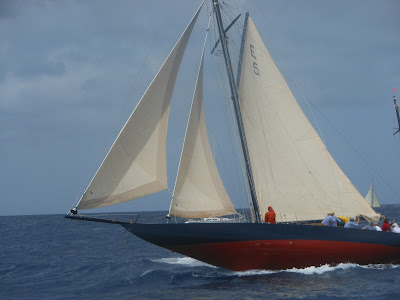 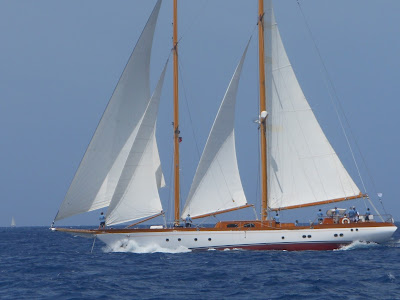 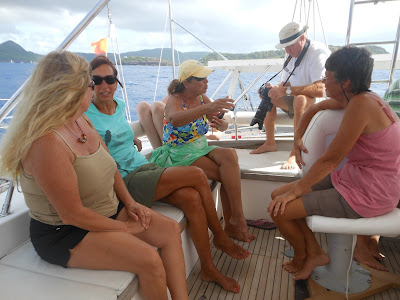 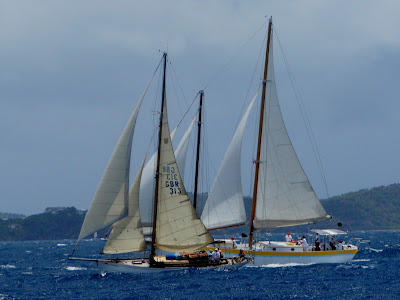 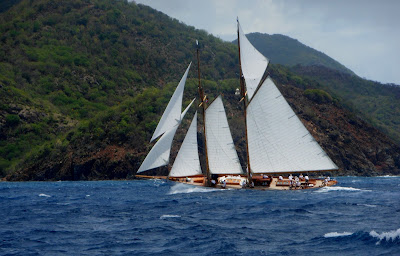 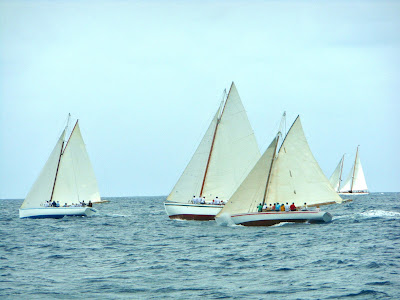 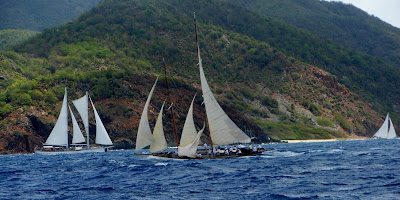 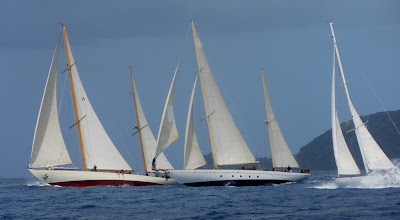 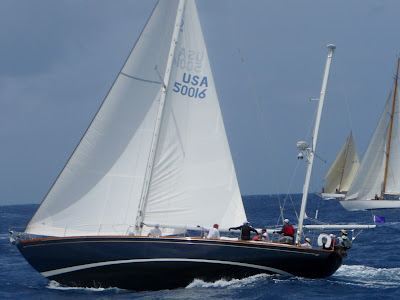 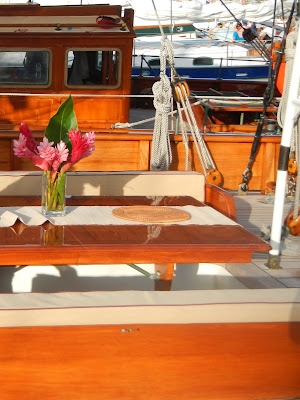 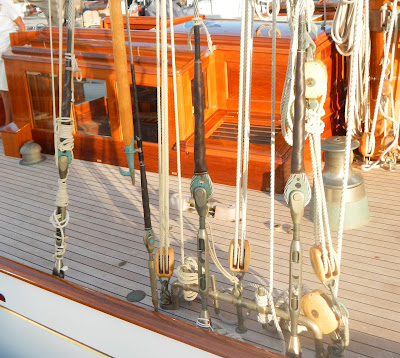 We made it to the BVI's and cruised the US Virgin Islands, the Spanish Virgin Islands ,
St. Martin, Antigua and Les Saintes in Guadeloupe.

From there we headed southwest to the Netherlands Antilles, and will spend hurricane season 2012 in Bonaire and Curacao, doing a little work and a lot of play!


After November 1, 2012, we headed as far east by north as we could, returning to the USVI, then resumed our southward explorations of Antigua, Guadeloupe and Dominica.


You can enlarge any photo by clicking on it!


Sinbad's adventures have been published!